The belief that low fertility rates, even with their potential negative consequences, are superior to high fertility rates is understandable. After all, we constantly see news of citizens from Third World countries immigrating to Western countries at great costs, and overpopulation is considered to be a prime cause. Furthermore, it is widely believed that if not for Western countries ample financial aid and birth control programs the already overpopulated Third World would fall into widespread starvation and chaos.  In summary, low fertility rates are considered more sustainable and economically healthier for societies than high fertility rates. The idea of associating low fertility with economic sustainability is also known as “Reproductive Health”.

Nonetheless, when looking at widely available demographic and financial data for countries it becomes clear that the Demographic Winter is worse than most realize.

However, what would happen when the government’s income starts to level off or drop? Economic failure in the near future is what will happen. This has as of yet not happened in the West, but has in Eastern bloc countries.

In order to understand why the West’s revenue will inevitably to fall sooner or later we need to look at income and debt projections –  below is one such projection from the Congressional Budget office: 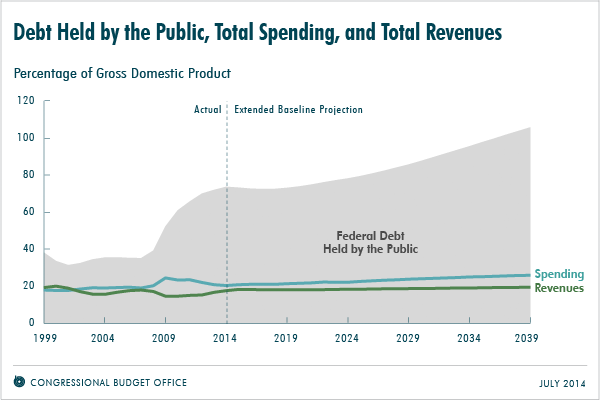 Here we can see the tendency that the US’s debt will continue to rise while revenue not only stays below the yearly spending but also remains at a more or constant value with respect to the GDP. Nonetheless, the revenue will actually drop, hence the problem. Why revenue will drop is very simple – it is tied to the population. As it is now the US’s fertility rate is below the replacement rate of 2.1 and falling. At some point when enough age demographics start to drop so to will the GDP and subsequently the government’s revenue. Below is a graphic from the US Census Bureau showing population projections from 2014 to 2060: 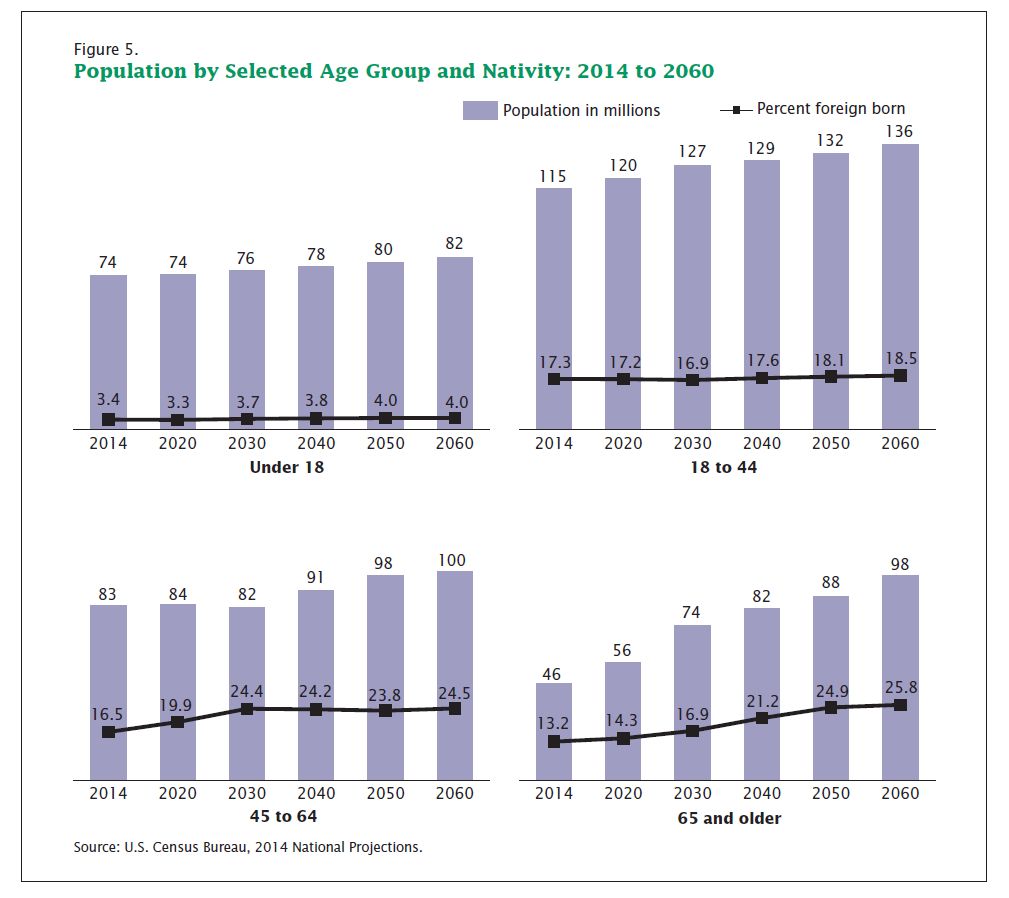 Here we can see that the Under 18 age demographic is projected to rise incrementally to at least year 2060. Unfortunately this is not realistic. This demographic will actually drop. Below is a graphic showing the US population from 1955 from UN data: Here we can see the similar age demographic of 0-19 has peaked as of 2015. The trendline in black clearly shows this tendency. Also, the 20-39 demographic has followed the same tendency of peaking from 1995 to 2015. This is because the 0-19 demographic becomes the subsequent age demographic(20-39) after a period of 20 years (subtracting deaths and adding immigration). Thus, since we also know that the US fertility rate is still falling, we can be assured that the Under 18 age demographic will not incrementally rise until 2060 like the Census Burea projection claims, but will actually begin to drop in the near future. The 18 to 44 age demographic will also follow this pattern as the Under 18 group ages. Only very significant immigration can curb this tendency, and this is not likely given the increasing spotlight on immigration in the US.

A logical question is how is it possible the US’s official population and economics projections could be so wrong?

There are two primary reasons. One, the notion that legal abortion has little effect on the declining birth rate. It has long been argued that abortion had historically been practiced at significant rates (it has not) and as such its legalization would actually increase birth rates due to the assumption that legalizing abortion reduces its overall incidence because it lowers the number of illegal abortions. In fact this same argument is still used by the US and the UN to push for the legalization of abortion where it is still currently illegal. Two, “Reproductive Health” is actually “healthy” for society and sustainable, hence the term. Again this is based on the notion that abortion has little or no detrimental effect on birth rates. Nonetheless, we see that a majority of countries that have legal abortion also have fertility rates below the replacement rate. We also see that countries that don’t allow legal abortion have much higher birth rates.

There is quite obviously a “disconnect” between what abortion (as well as birth control) apparently offer in terms of a sustainable future and the reality. Unfortunately, due to the belief that legal abortion and birth control are “healthy” for societies few governments are willing to address this issue. This is also exacerbated by the perception that the Third World is grossly overpopulated. Also, all the major demographic and economist institutions are in favor of abortion and birth control. And yet we see populations falling in Europe. In fact such is the problem of a falling population in Germany that it was recently estimated that Germany would need a 300,000 immigrants every year Germany would need a 300,000 immigrants every year for the next 4 decades to maintain a stable population https://www.gatestoneinstitute.org/9892/germany-muslims-demographic.

It’s clear the West will be obligated in the near future to address its unsustainable “Reproductive Health” policies. While some might claim that inevitable economic failure (and the subsequent turmoil) is an acceptable outcome for a more “sustainable” planet and as such is still preferable to “overpopulation” in the Third World here are a couple of facts that would put any notions of Reproductive Health as a sustainable alternative to rest:

Every theory that has supported the justification of depopulation policies, a.k.a. “Reproductive Health” have failed miserably. Also, the racist theories that white supremacists (eugenists) espoused to justify the drastic reduction of persons of color are equally as antiquated as overpopulation predictions. Nonetheless, this “Grand Experiment” of depopulation for a “sustainable” future continues to this day and ironically will soon cause the very consequences it was supposed to prevent – widespread suffering due to economic failure.

Unless more influential individuals like Elon Musk are willing to call attention to the facts regarding fertility rates western countries will be doomed to bear the unimaginable consequences, and sooner rather than later. The “Grand Experiment” has utterly failed.