Surprisingly, even as statistics of crime were compiled in the early twentieth century in the US and Europe, abortion was still deemed as very difficult to quantify even up until to the Roe v. Wade decision. Not conspicuously the primary sources of illegal abortion estimates were also the major proponents of birth control and abortion thus it should be evident that there was a clear conflict of interests. Furthermore, these same sources of illegal abortion estimates have virtually remained unchallenged to this day and are used as the basis of the United States’ and United Nations’ public policy of promoting the legalization of abortion.

Nonetheless, there is compelling evidence that illegal abortion can be predicted with a certain degree of accuracy, and certainly much more precisely than anything offered by those groups whose sole purpose was to reduce the world’s population by eliminating the “inferior races”, as they deemed persons of color. The primary source of illegal abortion estimates in the world today is the Guttmacher Institute, which was created by Planned Parenthood for the purpose of formulating propaganda in order to justify the legalization of abortion. Planned Parenthood was founded by Eugenists Margaret Sanger, CC Little and Lothrop Stoddard. Stoddard was a white supremacist who wrote “The Rising Tide of Color Against White World-Supremacy”. In spite of the Guttmacher’s obvious interest in depopulating the world its estimates are cited frequently by official US and UN sources. Furthermore, these estimates up until recently have not been subjected to a vigorous peer review.

Illegal abortion estimates began to appear at the end of the 19th century, many years after the abortion debate began. These estimated were offered mostly by medical practitioners who were also avid Eugenists, such as Max Hirsch who was referenced as an “expert” on the topic by Margaret Sanger. Nonetheless, these estimates were never put through any rigorous peer review. Also, in spite of the fact that these illegal abortion estimates lacked clear or proper methodology they were constantly referenced as authoritative. Furthermore, at the height of Margaret Sanger’s and other Eugenists activities in the 1940’s abortion’s method of classification was changed from the standard rate of incidence per 100,000 population to rates associated with births or the female population, thus effectively isolating abortion from other social indicators such as murder as well as ensuring peer review from other disciplines would become practically impossible.  This unique classification of abortion remains to this day. Abortion was reclassified by the US Bureau of the Census, who was led by a fellow Eugenist sympathizer, Halbert Dunn. Was this by mere chance? After all Halbert Dunn frequented many Eugenist conferences and even published illegal abortion estimates as well.

What is certain is that when abortion is converted to the standard method of measurement used for other demographic indicators the proposed rates of incidence are astronomical compared to other severe crimes, such as murder. Below is a table of illegal abortion estimates offered by Eugenists from the late 19th century up until the eve of the Roe v. Wade decision that have been converted to the standard demographic rate of measurement denoted by the expression “Population Abortion Rate”. This unique term was created to distinguish it from the common “abortion rate” designation. 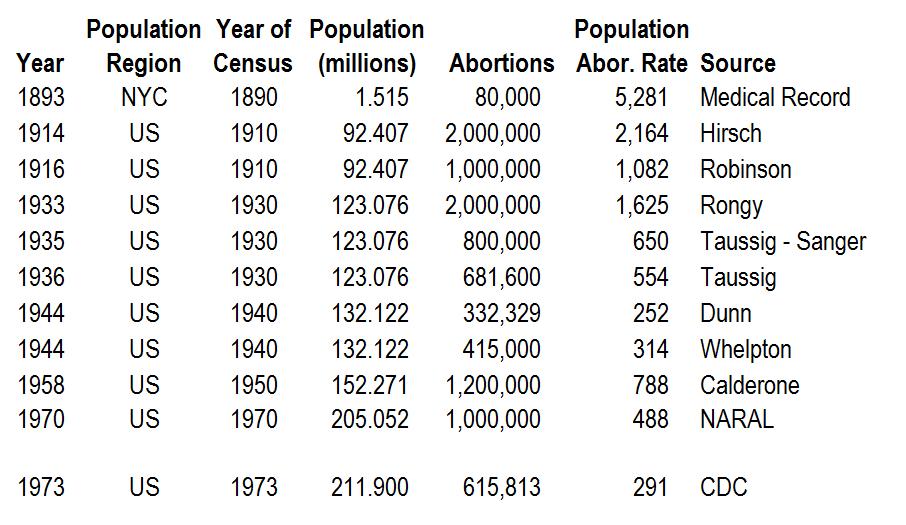 As a point of reference the death rate of WWII was equivalent to 430.

Below is another graphic that demonstrates the incidences of crimes during the same period from FBI records. 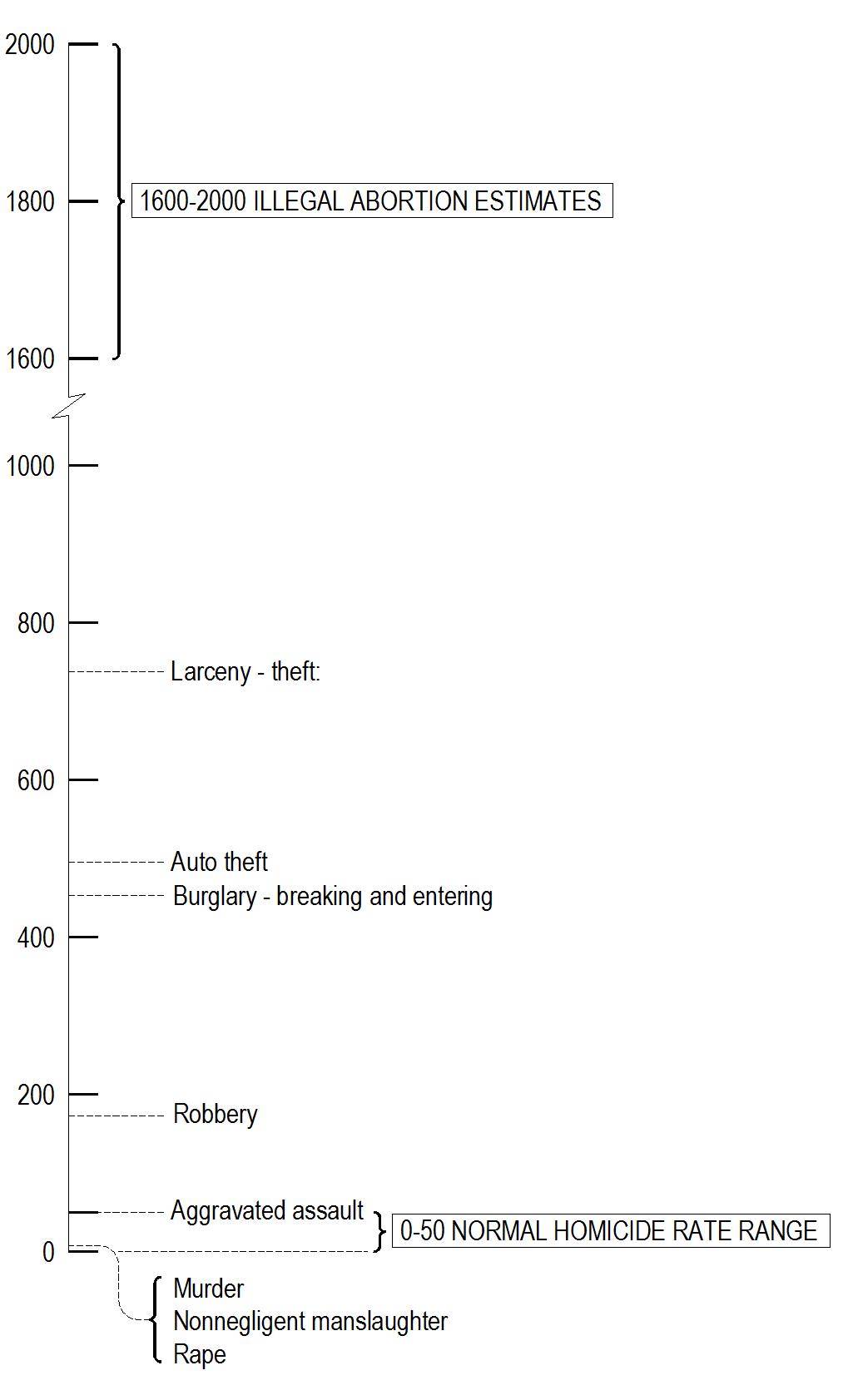 Here it is clear that the severity of a crime increases its incidence decreases. We see that murder rates are at the extreme end of the graphic far removed from the rates of other crimes, such as theft. In this particular case murder rates in the US at the time we less than 10. Historical homicide rates in the modern era generally range from 0 to 50, with 50 being a very high number that implies widespread violence. We also see that the proposed abortion rates by Eugenists up until 1932 were at rates normally associated with petty crime(1600-2000). If we are to believe the Depopulationists (Eugenists) estimates in the first table we must also assume that women were killing or allowing to kill their children at homicide rates (1600-2000) very far removed from the normal ranges (0-50). Given that abortion was seen as murder throughout Europe up until well after the Protestant Reformation and the fact that abortion had only become a social problem from the early 1920’s and it is not plausible that the rates proposed by Eugenists could not have been possible. We must therefore suspect that the Eugenists proposed illegal abortion rates were nothing more than a means to an end to moralize the legalization of abortion by creating the false perception that abortion must be legalized in order for is incidence to be reduced. This is still the main argument used by the UN today to push to legalize abortion where it is still illegal, and like the early aforementioned illegal abortion estimates, today’s estimates offered by the Eugenists at the Guttmacher Institute are equally baseless and without merit.

See more in depth discussion regarding this topic in our book “Justifiable Homicide: A Radical Scheme to Destroy a Race”.